How long has an idea grown before it pops out successfully? Let’s make Cinnamon Swirl Bread that’s growing with us for centuries!

As I recently have some time, I had been browsing on the internet yesterday. On the lookout for fresh, fascinating ideas, inspiring meals that We have never used before, to astonish my loved ones with. Searching for a long time but could not come across too many interesting stuff. Just before I thought to give up on it, I came upon this scrumptious and simple dessert simply by luck over Suncakemom. The dessert looked so tempting

on its pic, it called for fast action.

It absolutely was easy to imagine just how it is made, its taste and how much my husband might like it. Mind you, it is quite easy to please him when it comes to puddings. Anyways, I went to the website and simply followed the detailed instuctions that have been coupled with impressive pictures of the process. It just makes life less difficult. I can imagine that it’s a bit of a inconvenience to shoot photos down the middle of baking in the kitchen because you normally have sticky hands thus i pretty appreciate the commitment she devote to make this blogpost and recipe conveniently implemented.

With that in mind I am empowered presenting my own, personal formulas in a similar fashion. Many thanks the thought.

I was tweaking the main recipe to make it for the taste of my family. I have to mention it had been an incredible outcome. They enjoyed the taste, the overall look and enjoyed getting a sweet such as this during a stressful week. They ultimately demanded more, many more. Hence the next occasion I’m not going to make the same mistake. I’m gonna multiply the amount .

This is based on the Raisin Bread from SunCakeMom 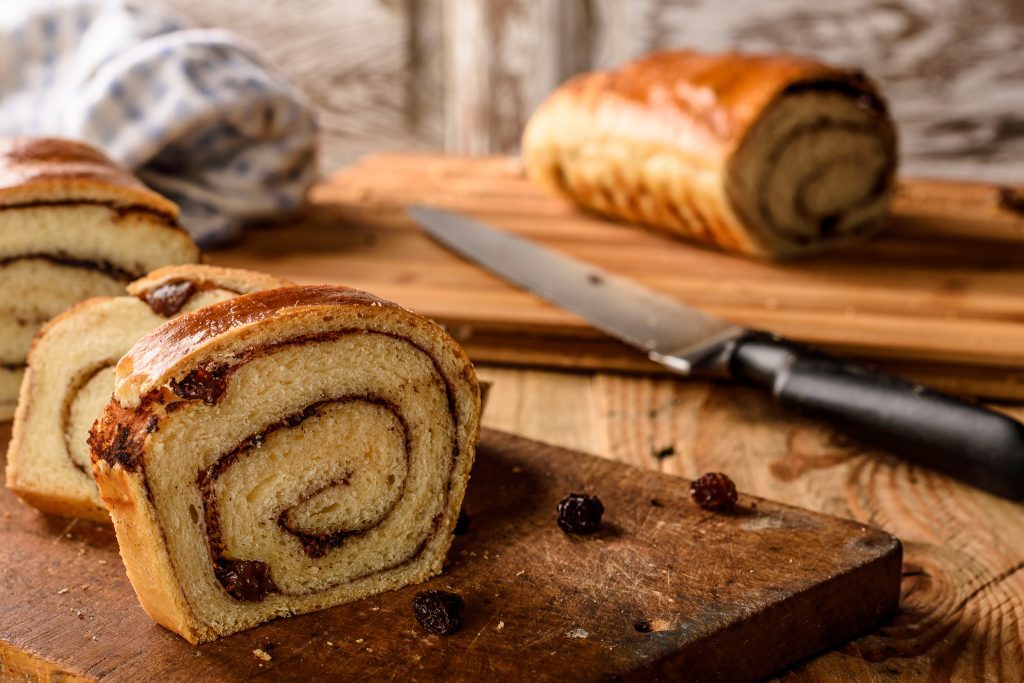 In a large bowl add the flour, eggs, butter, yeast and milk.

Knead them together until the dough gathers into a ball.

After about 30 – 90 minutes depending on the temperature, the dough should be doubled or at least raised.

Take the dough out onto a lightly floured surface. The recipe is for 2 rolls and will need to divide the dough into 4 possibly equal parts.

Roll two of the dough out to the size of our baking tin.

Then roll it out in the other direction about 4 times as much.

Cut the fruits and chocolate to the size we like them best.

Cream butter, cinnamon and optional sweetener with an electric beater.

Spread half of the buttery cinnamon on top of one of the dough then sprinkle half of the dried chocolate on top.

Place another dough on top. It doesn’t have to be pretty and luckily the dough will allow us plenty of adjustments one placed on each other.

Roll it up gently. It doesn’t have to be tight.

Once it’s risen, beat egg yolk and a brush it on top.

Put the dough into a preheated 365°F / 180°C oven and bake it until its top is getting a lovely golden brown color, for about half an hour.

Let it cool a bit then slice and serve.