Mounds or Bounty? Doesn’t matter where we are in the world! This moist chocolate and coconut cake will remind us what we love in those chocolate bars!

As I lately have a little time, I was surfing on the web the other day. On the lookout for fresh, fascinating thoughts, inspirational meals that I’ve never tested before, to amaze my family with. Hunting for a while unfortunately couldn’t come across any interesting things. Just before I wanted to give up on it, I came upon this fabulous and simple treat simply by chance over Suncakemom. It looked so fabulous on its image, it called for fast actions.

It was not difficult to imagine the way it is made, its taste and just how much my hubby might love it. Mind you, it is extremely easy to delight the guy when it comes to cakes. Anyways, I went to the website and then followed the simple instuctions which were combined with superb photos of the task. It really makes life much simpler. I can suppose it is a bit of a inconvenience to shoot pics in the midst of baking in the kitchen as you normally have sticky hands thus i highly appreciate the time and energy she placed in for making this post .

That being said I’m empowered to present my very own dishes similarly. Many thanks for the idea.

I was tweaking the main formula to make it for the taste of my family. I have to tell you it absolutely was a great success. They prized the flavor, the structure and enjoyed having a delicacy like this during a stressful workweek. They quite simply requested more, more and more. Thus the next time I am not going to make the same miscalculation. I’m going to twin the quantity to make them pleased.

The Coconut cake is from SunCakeMom 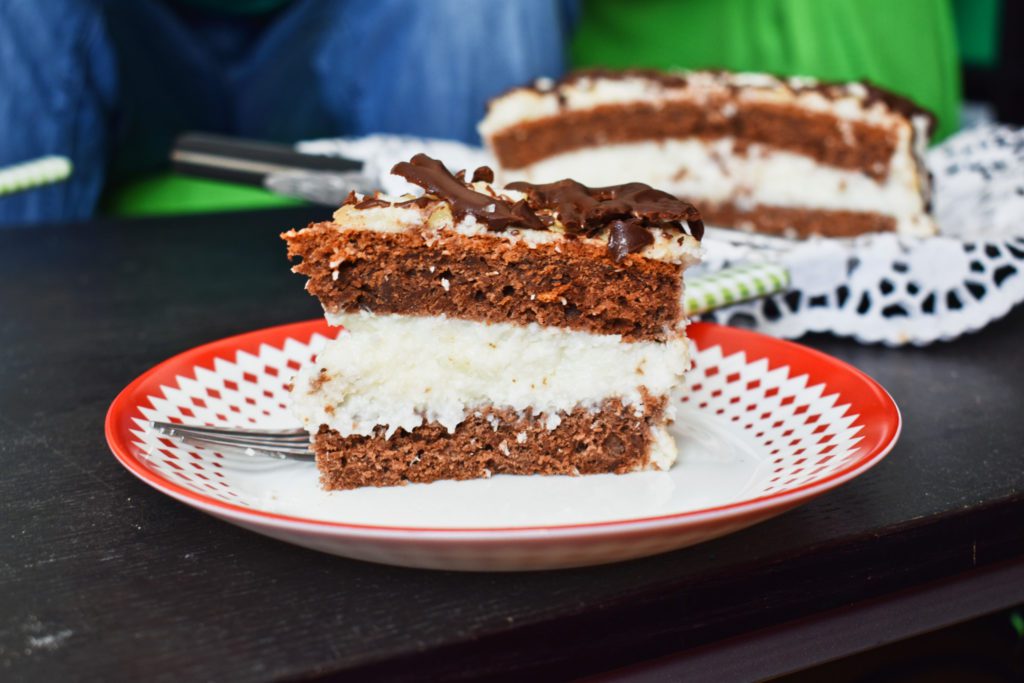 First of all, we”ll need 3 medium bowls to sort different cake ingredients in.

Mix unsweetened cocoa powder and warm water in the first bowl until we get smooth liquid without any lumps in it. Put it aside a bit to cool.

Meanwhile measure and mix flour with the baking powder.

Whisk butter and honey with an electric-mixer until butter has a light yellow color. Then put yolks into the mixture one by one. Mix them well.

With the mixer on low speed, add flour in three additions alternating with the cocoa mixture, mixing each addition just until incorporated.

Pour batter into prepared round cake tin and put it into the 350°F / 180°C preheated oven.

Bake the cake for about 40 minutes or until a toothpick inserted in the center comes out clean.

When baked transfer the tray onto a wire rack and let it cool completely.

To make the filling, get a medium sized bowl to put shredded coconut, honey and cornstarch into it.

Pour about ½ cup / 100ml milk into it and blend them well with a wooden spoon until we have a smooth mixture.

Pour the rest of the milk into a saucepan to warm it before we put the coconut, flour and honey mixture into the bowl to boil. Whilst waiting for it to boil, whisk butter.

Put the coconut mixture into it and stir continuously until it bubbles.

Place it aside and wait until it cools down completely and ready to work with. Mix whisked butter evenly into the mixture for smoother consistency.

When cake cooled, get it out of the tray onto a wooden surface and cut it in half horizontally.

Divide the cream into two equal parts. One half will be the filling the other half is the topping.

Spread out one half evenly on the bottom of the cake.

Place it in the fridge for 10-15 minutes to have harder consistency (it helps to work with it later).

Place the other half of the cake on top.

Now it’s ready for the topping. Spread coconut cream on top to cover the cake completely.

Continue spreading the coconut cream on the side as well.

Break chocolate into pieces and put it into a small saucepan. Place saucepan of chocolate on a slightly bigger saucepan of about 1/2 cup / 100ml water. Stir occasionally until melted completely.

Use a spoon to decorate the top of the cake with the melted chocolate. Don’t forget to take care of the sides either.

When finished, put cake in the fridge until the chocolate gets solid again.